Watch What Burnaboy Did To Fans On The Street (What Do You Say?)

Real Or Staged? Is Tonto Dikeh’s Nanny On A Vendetta? (Watch New Interview)

See Why Olajumoke Is This Excited. Hehehe 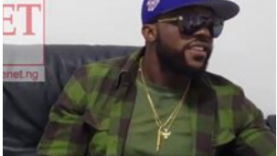 Iyanya Onoyom Mbuk (born 31 October 1986) on Palm Street in Calabar, Cross River State. His mother was a head mistress and his father was a forester. Iyanya has described his mother as the household disciplinarian, while his father was the gentler of the two. After graduating from the University of Calabar, he worked in a hotel and sang karaoke at a local bar he managed. Iyanya began developing his vocal abilities at local bars which include: Fiesta Fries Bar, Mirage Nite Club, and West-Life. Iyanya cited British singer Craig David and American hip hop artist R. Kelly as his key musical influences. Iyanya rose to fame after winning the first season of Project Fame West Africa, and is best known for his hit single Kukere. He co-founded the record label Made Men Music Group with Ubi Franklin in 2011 and released his debut studio album My Story the same year.

When Actress Rita Dominic Gets In The Mood. Wawuu

Some Facts About Paul Walker For All Fans And Lovers. This Video Will Make You Cry And Even Love Him More