For You – Skales @YoungSkales (Video) 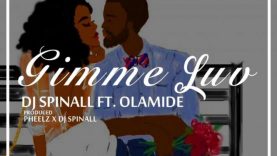 DJ Spinall aka Mr. consistent has team up with YBNL boss – Olamide to deliver “Gimmie Luv”. Song Produced By Pheelz & DJ Spinall, written by Olamide. definately won’t be short of a hit.

DJ Spinall , After the successful release of his sophomore album “TEN”,  started 2017 on a high note. First  was “Olowo” featuring  Davido & Wande Coal.

But trust DJ Spinall not to keep his fans thirsty, he decided to team up with ever baddest Baddo (Olamide) on this Joint titled “Gimme Luv”. I feel somuch love in this Video
It is a much watch Video when you have Olamide and DJ Spinall combination.

Channels Have This Video