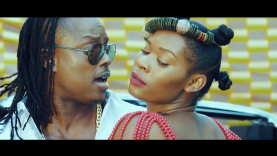 Kirakita – Gee4. Gee4 returns with the official music video to his well accepted tune, KIRAKITA.He takes the afrobeat culture to the streets of New York City in this mind blowing and captivating video for the equally breathtaking tune.

Directed by America-based music video director, Loud Filmx, this colourful video shot in Times Square and other parts of New York is inspired by the current crossover of the Fela-born music genre and depicts Gee4 as advocate for the emergence of the afro and American cultures.