Phlow – Love It Or Not ft Khandie

Patoranking – God Over Everything

Magnito – As I Get Money Ehn ft Patoranking 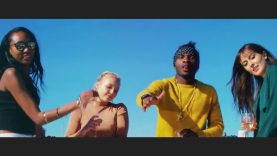 Mostwanted – Dancefloor: International rapper Mostwanted aka Mustardseed starts his 2017 with the release of his much-anticipated dance track, title dancefloor, The afrobeat/ dancehall party song was produced by one of Finland biggest Dj Nestar, and the video was directed by Australian movie maker Mark Hobz.

After the release of his last inspirational gospel video ‘LIFE, directed by Mr Moe Musa, which brought him so much accolade from high profile religious bodies across the world and different award nomination including SSMA, The rapper comes back with this smatching song and video for his beloved fans world-wide who has supported and stayed loyal to his sound for over 15 years, to enjoy and spread love this new year 2017.