For You – Skales @YoungSkales (Video)

You Won My Heart 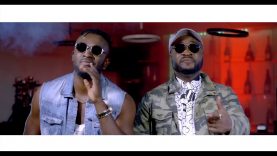 Alterplate Music presents the visual for Knees & Toes by Collins Ogheneovo Clever who also goes by the stage name DEZIGN.

The dance hall tune also features Dezign’s label boss, Harrysong.
Dezign and Harrysong share a history as childhood friends and in the early stages of their career were members of a music group in Warri known as ‘Dezigner Voices.’
Knees and Toes is his first effort under Alterplate Music and was produced by prolific music producer Del B.

Let me give a lil’ story on Dezign. We were childhood friends and his grand mother was our landlady. We go way back and to think that he would be one of the Nigerian artistes wasn’t something anyone back then envisage. Looking at how far he has come, i am truly impressed with his musical development. Trust me, it wasn’t a very easy start for Dezign but he has been able to prove that persistence and consistency are two keywords to success. He had a group called the designer’s voices in Warri that consisted of about five church boys and they harmonized perfectly well, often doing duets in acapella during church events. They spilt one by one until Harrysong joined in with his melodious voice that got every young waffi babe in trance.

You may also like Sugar n Spice by Yemi Alande

We had moved away from Dezign’s house as tenants during the 1999 Delta crisis and so i lost touch with what events happened around the dezigner’s voices but i did know that Harrysong started to leap in widths and bound whilst Dezign was still struggling to push in through with his Dancehall vibes. The most intriguing part of the friendship they  both have and still share is that even though Harrysong had made a name for himself and his brand,he never left his childhood friend behind like many would. He held on to his friend’s hand through his journey in the music industry and still is. It is no wonder Harrysong now manages Dezign! That for me is what true friendship should be!

L.A.X releases the video for ‘Sempe’

MUSIC VIDEO: I Can’t Kill Myself by Timaya